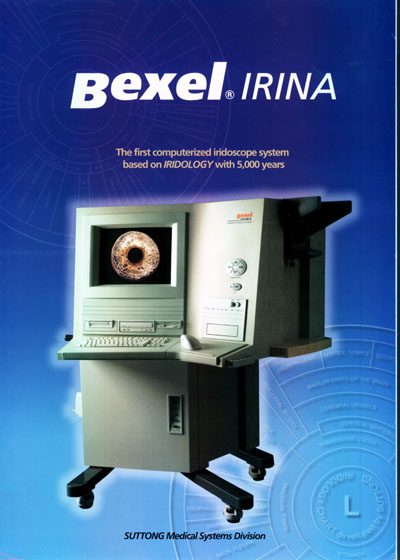 352 patients with different diseases (mostly of the hepatic-bilary system) were examined under hospital conditions.  Many of them were relatives and representatives of different generations of the family.  Patients were 14 to 83 years old and there were 126 men (35.8%) and 226 women (64.2%).

Iridology examinations were carried out with the BEXEL IRINA device.  The image of the iris was placed into the computer memory and displayed on screen with the help of the optical system with illumination camera, and special input units of the optical equipment connected to the computer.  The iris images are converted into graphic files.  Iridologists can see movements of the iris structures in real time mode or they can fix the selected images.  The advanced iridogiagnostic software of the system provides computer processing of the iris picture, automatic determination of the main iris structure and automatic measurement of the geometric parameters, the area of the irises, the area, form, the position of the pupils, width and form of the pupillary margin, and the form of the collarette.  The first part of the iris evaluation is based on the processing of these parameters, is also done automatically.

The second stage of the diagnosis is based on the mapping of the iris according to the selected chart.  Designed especially and the newest iridological chart, including the achievements of modern iridology, was developed by Dr. Mararchuk.  Superposition of the chart on the iris of the person is also done automatically with the corresponding adjustments to the borders of the iris structures of the person.  Hardware and software are adapted to the dark pigment-saturated type of irises of Asian people.

The conclusions made by iridology examinations were compared with the data of other medical diagnostic methods carried out both before and after the examination (biochemical X-ray, endoscope, angiographic radioisotope and intra-operative examinations, tetrapolar rheography, ultrasonic study, computer tomography, mammography, etc.).

Generally, the pronunciation of the iris signs depended upon the duration and severity of the pathological process.  The outlined stroma, the areas of clarification, the rare pigment enclosures and small lacunae took place in 74.6% of the patients in which pathology was occasionally revealed.  These patients were asymptomatic in their study of disease, had a duration of disease of less than two years, and had no hereditary parallels for disease.  In the case of diseases with duration of more than three years, frequent exacerbations and distinct indication to the hereditary character of the process changes were present in the hepatic-bilary area of the iris in 92.6% of the cases.  Pigment spots occurred in 69% of the cases and deep lacunae, with thick walls in combination with pigment spots occurred in 18% of the cases.

In 22% of the patients with concrements in the gall bladder, there were no iridological signs on the irises.

Similar data were obtained for patients with chronic non-calculous cholecystitis (49%).  The local changes in the gall bladder sector of the right iris were revealed in 77.6% of the patients.  Most often, (66% of the patients) an iridological sign of non-calculous cholecystitis is shown by the local whitish thickening of the iris stroma in this sector zone or a non-linear clarification of the stroma.  Comparing the inheritance of cholecystitis in the different generations of families, we have come to the conclusion that this pathology is associated with sex and is inherited mostly by females.

The most frequently accompanying disease of chronic cholecystitis are:  chronic pancreatitis, cardiac ischemic disease, gastro-duodenal pathology and kidney diseases.  The most common iridological signs in people with portal hypertension (42) were pigmentation of the autonomous wreath (74%), internal heterochromy (31%), changes in the right iris in the 7.30-8.10 sector (87%), and drawing-in of the autonomous wreath in the liver area of the right iris (76%).

In many of our cases, pathological iris signs in the liver projections were found in people having no clinical symptoms of any disease.  Detailed laboratory examinations of these people revealed initial changes in the hepatic-biliary system in 63% of these people.  Such signs can be considered as the markings of hereditary risk of hepatic-biliary pathology which can develop in the future.  The correct prophylactic measures such as diet etc. can help prevent disease.

These studies were conducted at AJU University General Hospital located in Seoul, South Korea. They ultimately succeeded to obtain an impressive government certification in 1998.  These were the outcomes. 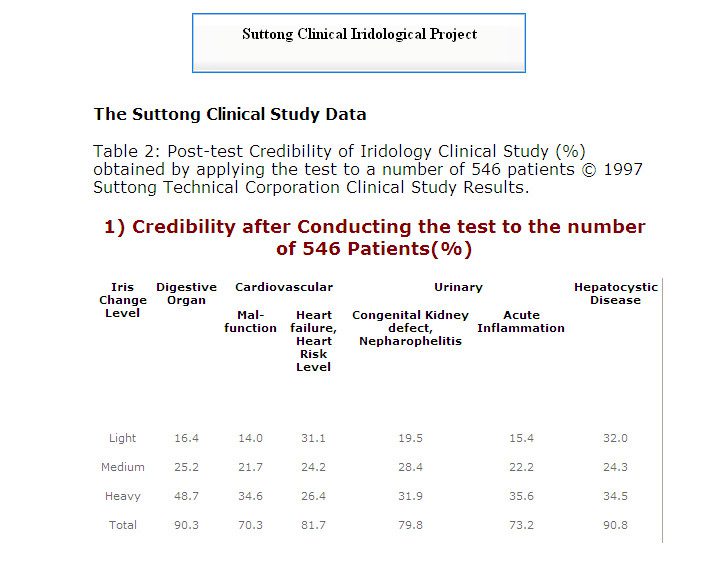 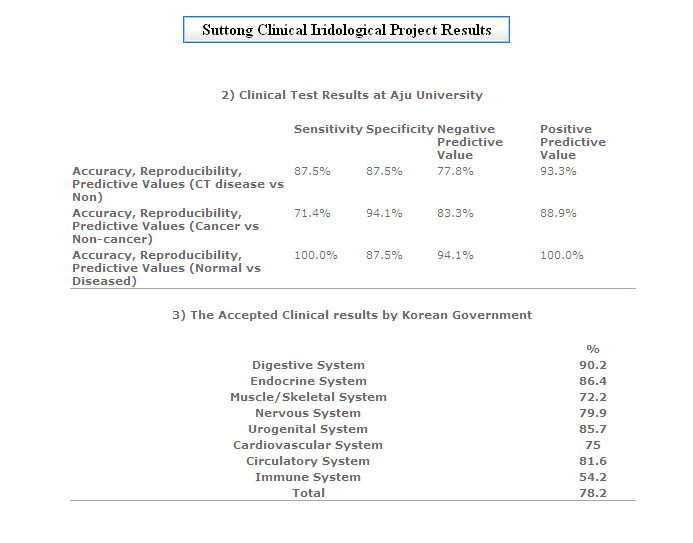 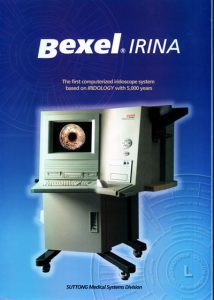