Identify patterns of correlation between somatotype human predisposition to diseases of the liver.

Back in the ancient world, was spotted relationship of various human diseases, with its constitution. Currently, under the constitution understood as a set of functional and morphological characteristics of the organism, formed on the basis of inherited and acquired properties that determine the identity of the reaction of the organism to external and internal stimuli. An important component of a real person’s constitution is the constitution of the somatic or body features. Somatotype – body type – defined on the basis of anthropometric measurements (somatotipirovaniya) genotypically driven, constitutional type, characterized by the feature level and metabolism (primary development of muscle, fat or bone), susceptibility to certain diseases, as well as psycho-physiological differences. Identifying patterns of correlation between somatotype human predisposition to disease is a serious tool in the differential diagnosis in the early stages. Especially for diseases of the liver, which responds well to treatment for preventive measures (diet, healthy life style, etc.)

The purpose of the study

Identify patterns of correlation between somatotype human predisposition to diseases of the liver.

The study was conducted by surveying employees and patients RSPC “otorhinolaryngology” (Minsk) of 25 persons of which were found 8 people with liver disease, and students of Gomel State Medical University (Gomel), respectively, 50 and 8.

Results of the study

The study found that the number of people with liver disease to the total number studied was 21.34%, including: 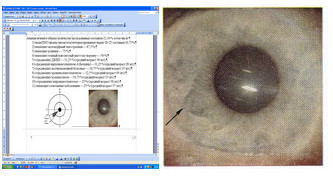 As an express method of confirming the diagnosis, was used iridology (the definition of human diseases iris), the extended gap iris of the right eye and bulging Autonomous ring in the projection area of ​​the liver – for 8 hours.

The result of liver disease were able to confirm in 25% of affected patients. It is especially true for diseases such as cholecystitis and cholelithiasis. It should be noted that this characteristic feature is usually only able to identify patients older than 30 years when the disease becomes chronic.

As follows from the results of the study, the following conclusions:

1. Eye color is not a predisposing factor for liver disease.

3. Elevated BMI index can be considered for the prevention of diseases of the liver and therefore recommend the patients to lead an active lifestyle and a diet.

4. Acute diseases, in the absence of adequate attention from the patient to them, become chronic, and often to several combined.

5. Iridodiagnostics methods can be used for differential diagnosis of liver disease in people over 30 years, primarily to detect disease at an early stage, when they have an acute form.